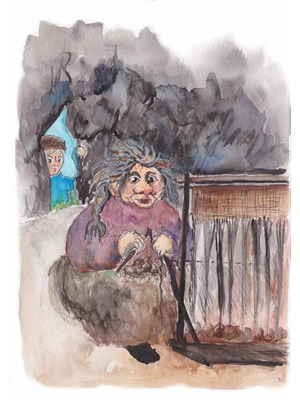 Once upon a time there was a hard working young and a well-to-do sheep farmer. He had just married a young shiftless woman. She was lazy and did not respond well to her husband‘s requests to process wool. This annoyed the man.

One day an old woman appeared and asked the wife a favor. „Can you do something for me in return?“, asked the wife. „Maybe, what may that be?“, replied the woman. The wife handed the woman a large sack of unprocessed wool, given to her by her husband, and asked her to process it. „I‘ll do as you ask, and deliver it to you on the first day of summer. But instead you must guess my name.“ The wife agreed to this.

Now winter passes and the farmer keeps asking his wife how she is doing in the processing of the wool. At first she tells him that it will be ready by summer, but then she starts to worry because she has no means to find the old womans name. She therefore tells her husband the full story, and he becomes worried and tells her that this old woman is a hag that will eventually abduct her.

Later during winter the farmer was out walking when he came across a large rocky hill. Suddenly he notices a big woman singing and gloating, inside the hill through a small crevice, repeating the same sentence. „Ho, ho, ho, Gilitrutt is my name, and no one will know!“

The farmer, much relieved, was confident that this was the woman her wife had met the autumn before. He then returned home, but does not tell his wife the news.

It‘s not until the last day of winter that the man tells her worried wife the name he heard. He then leaves her wife to meet the old hag alone, as she did in the begining.

The wife is in bed when the hag arrives on the first day of summer. Slinging her processed wool on the floor the hag asked the wife for the name. Fearing for her life the wife finally replies with the correct name. The hag was so surprised that she fell to the floor with a loud bang, stood up, left and was never seen again.

The wife was so relieved, that she totally changed her ways, became hard working and efficient and always processed her wool herself.