-
-
Home
/
The Sorcerers of Westman Islands 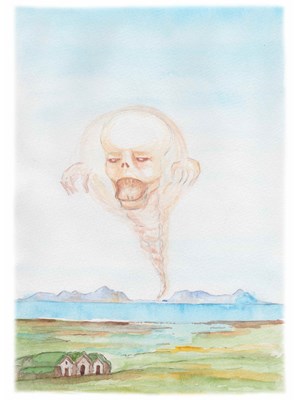 When the Black Death plague raged in Iceland a group of sorcerers decided to escape death by moving to the Westman Islands.

When they expected the plague to have passed they needed to know if there were any survivors. So they appointed one of them to go to the mainland and find out. He was told to return before Christmas or they would send him a fatal shipment.

The man went far and wide but couldn‘t find any survivors. All the houses were open and corpses were lying all about. Finally he came to a closed house and in it was a young and pretty woman. She also had searched long and wide without success and was relieved to find that she was not alone. She invited him to stay and so he did. When Christmas grew near the man explained to her that he must return or face the consequences. Still the woman managed to persuade him to stay.

On Christmas Night a shipment in the form of a fly arrives searching for the man. The woman, recognizing the danger, managed to trick the fly and captivate it.

Although they could celebrate for the moment they knew that this was just the begining. So, at the start of a new year, the woman asks the man to come visit an old man, bringing the captured fly with her. The man released the fly, rubbed it gently, making it colossal in size and instructed it to go to the Westman Islands and intercept all future shipments from the sorcerers, saving the man.

The man and the woman later married, had children and prospered.